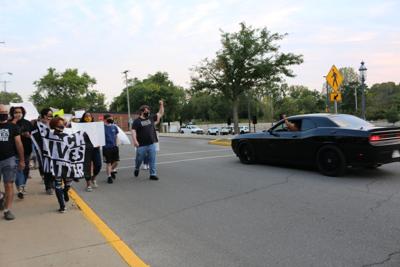 Position: Franklin College needs to do more than sending emails and releasing statements. An actual change must be seen for students of color.

At the start of the new semester, the college released a new, comprehensive plan for diversity and inclusion, the first of its kind under President Kerry Prather and a step that stood out from past conversations for its transparency and breadth.

The plan talks about the goals the college has for different areas around campus, such as academic affairs, business and finance, athletics, enrollment and more. Each section shows what the college wants to accomplish in that department and how they will do it.

The plan arrived amid continued conversations about racial justice in America. Those conversations began with new force after the deaths of George Floyd, a Black man who was killed by Minneapolis police, and the wrongful death of Breonna Taylor, a Black woman killed in her home while sleeping. Just last week, a grand jury indicted one of the officers involved in Taylor’s death, not for murder, but for wanton endangerment charges.

Before the plan was released, Franklin College departments made services available to students affected by these events.

The counseling center and the chaplain offered a safe space for students to voice their emotions, making sure they felt heard. Faculty and staff reached out to students individually, checking on their mental health and demonstrating their support.

“The timing of all of it is challenging given that we are such a tight, small community, and we were not together during that time,” Vice President for Student Development and Dean of Students Andrew Jones said.

Terri Roberts-Leonard, director of diversity & inclusion, said the statement, released on Facebook July 9, sparked rage among alumni, current students, staff, and former staff. Roberts-Leonard was contacted throughout the summer, dealing with rage and disappointment concerning the college’s lack of involvement and response.

The statement did not directly mention the movement in response to the Black victims, but instead was a general statement that expressed sympathy. It noted the “shocking violence of racism in images and names in the media” and said explicitly Black Lives Matter.

“I think it just ended up making it worse,” Roberts-Leonard said.

Prather said statements from the college about Black Lives Matter were meant to make Black students, faculty, staff and alumni feel supported, even under the social constraints of the COVID-19 pandemic.

“We couldn’t wrap our arms around it, both because of distance and because nobody is wrapping their arms around anybody right now,” Prather said. The post stands in solidarity with the Black community and says that Franklin College is working to combat racism.

But comments under the post mostly disagreed with previous approaches by the college to diversity and what they called the college’s failed actions throughout time.

Alumna Betsy Dunbar replied, “it has gotten better, but nowhere near [where] it should be.”

Taylor McElwain, 2019 alumna, proceeded to share her experience as a student of color on campus where she called out the college for their lack of accountability when she was harassed by two white students and nothing was done. A former employee, Michael Rivera, said he had to deal with multiple racially driven incidents but they would later be forgotten.

Comments like this are an example of the long path Franklin College still needs to walk before becoming a college who embraces diversity and inclusion. It is beyond making promises but standing up to your word and making a change students can see.

“People are rightfully upset by injustice, and if you are either in a population that has directly experienced oppression and injustice or are closely in community with those folks, then you won’t have patience for anyone who tries to tell you it’s going to take time to change,” Director of Religious Life, Chaplain and Black Student Union co-advisor Hannah Adams-Ingram said.

Roberts-Leonard said students have shared their frustration towards the current and past administration multiple times. They talk about how they feel their voice is shut down or dismissed at times.

“They want real systemic change,” she said. “They said they got the feeling that administration is like, ‘Woah look at these things we have done, like aren’t you happy with that?’”

But there needs to be more. As sophomore Maya McCloud said, there’s still a disconnection among the white and Black students on campus.

McCloud, who is Black, shared a moment where BSU students took the time to write the names of Black victims of police brutality and “Black Lives Matter” with chalk on the sidewalks. But for what it looked like, people tried to erase those messages by purposely throwing liquids on them.

They never found the ones responsible for the act, but for the Black students, that was an act of racism.

“Some people are willing to learn, but that was obviously malicious,” McCloud said. “It makes me sad almost.”

McCloud talked about the feeling of being an outcast on campus. She doesn’t feel the same support between Black students and other clubs that involve mostly white students. Senior and President of Black Student Union Alexis Cheatham said she feels like they don’t belong at campus events or activities.

“I know a lot of people who don’t go to certain events by themselves because of things that have happened and they just don’t feel safe,” Cheatham said.

BSU members are not in charge of getting students to participate and learn about diversity. They are students like the rest of us who have classes, extracurriculars, and jobs. It is the school’s responsibility to involve and educate the campus because one person or group alone, like Roberts-Leonard, Diversity Advocates and Black students, cannot be the only ones working to be accepted. Others must also work on accepting them.

Cheatham pointed out the diversity plan is a strategy to listen to the Black students on campus. But diversity should not stop at Black and white community members. Diversity is about listening to everyone’s needs: Those who are Black, Hispanic or Latinx, those with disabilities, women, older students and much more. Not everyone is being heard equally.

“While the Black Lives Matter movement is one of the most prominent things going on right now, on the page they should’ve said, ‘while this page is focusing on this movement, we acknowledge other minorities groups are having issues,’” Cheatham said about the diversity plan. “I’m not just black, I’m also queer and I’m also a woman.”

Change has a long way to go, and Franklin College becoming aware of these changes is just the beginning.

What should come next is proof they are keeping the promises they are making.

Students like McCloud and Cheatham are happy the administration is listening to their concerns and demands, and hope the communication continues to happen for future students.

“We have to have hope that we can change, because if we’ve given up then I don’t know that change can happen,” Adams-Ingram said.