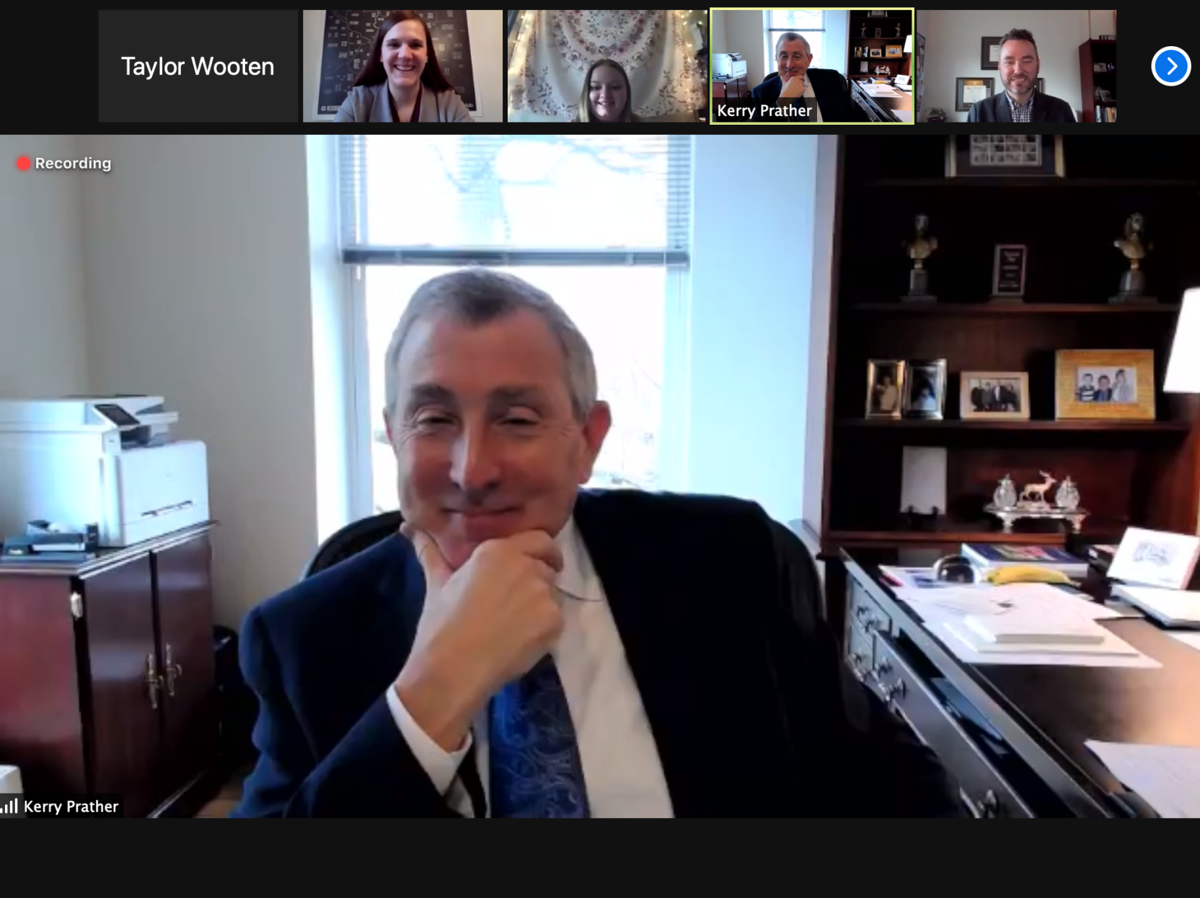 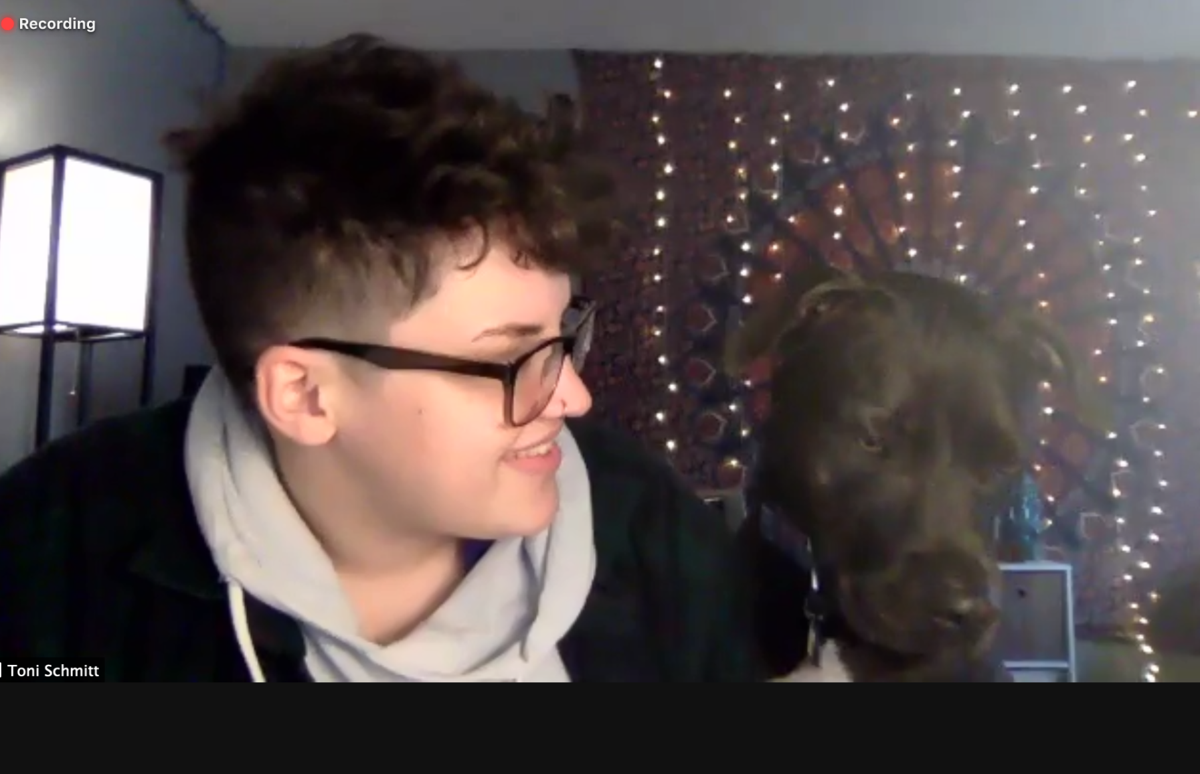 Prather began by answering if students will be required to be vaccinated for fall semester, saying that the college is still studying their options. He said the alternative to requiring the vaccine would be limiting the movement and activities of unvaccinated students.

“I know in talking with other presidents even around Indiana, all of those options are kind of in the mix,” he said. “And honestly I think the preference of most institutions is probably likely to be to require the vaccine.”

Prather said there are about 30 colleges and universities across the country that have announced they will require the vaccine in the fall. Jones and Prather also said the mask requirement is here to stay, at least until the end of the academic year. Fall will be decided after research is done over the summer.

In response to discussion about the vaccine, Jones asked why only about 120 students have utilized the opportunities to become vaccinated that the college has provided.

Students said that peers have been getting the vaccine elsewhere or could be waiting in order to ensure it is completely safe.

Senior Emily Dalton suggested a survey be done in order to get a more accurate count of how many students have received the vaccine. Prather said the college is getting data from the Campus Clear app, which recently added a “fully vaccinated” option, but he liked the idea of surveying students to get definitive data.

Dalton also said she contracted COVID-19 despite receiving the vaccine, so a survey could be used to report similar experiences.

Prather was encouraged to hear that students are getting vaccinated elsewhere.

“I'm encouraged by all of that, because, you know, the conventional wisdom would be, ‘Well, everybody's just kind of delaying the inevitable.’ But I think it sounds like there's a sizable percentage of the population that was not only not waiting, but actually were ahead of us, which is fantastic.”

On a question regarding if the college would give exemptions for religious reasons to not receive the vaccine, Prather replied that it would.

Toni Schmitt, vice president of Student Congress and moderator of the discussion, asked how students can communicate what they want to see at FC to college officials.

Prather replied that the campus climate survey that students are asked to fill out every few years is one way for students to do that, along with communicating with Student Congress members who have discussions with faculty.

“I want this to be a student focused administration. I've worked for about five different presidents, and probably the single greatest lesson that I learned from them, from one of them, was to end every conversation and debate with, ‘how does this impact the students?’” Prather said. “Because that's really the only thing that matters.”

If students need a direct answer to a question, Prather said they should consider going through Jones or someone else in the student development division.

“I'm happy for any student phone calls, emails, stopping by,” Jones said. “I'm happy for any of those things to happen, and if I happen to be someone that a student doesn't know or would rather not approach, anyone on a student development team can can receive that concern, or that question, and bring it to me even anonymously if a student really feels like that's the best route for them.”

Dalton asked who students can contact to discuss professors not showing leniency or being unreasonable with expectations for students during the pandemic.

“We're kind of having issues with as far as assignments and everything go and we just don't really know how to put in those type of concerns when it's not the end of the semester on those evaluations,” Dalton said.

Prather said these issues should be directed to Vice President of Academic Affairs and Dean of the College Kristin Flora. He also said professors may be dealing with COVID fatigue and having a hard time teaching both in-person and on Zoom.

Schmitt, citing discussions at a Student Congress town hall, said some students felt unsupported by the requirement to have a COVID-related reason to use Zoom and by  difficulty reaching Nurse Tracey Lunsford.

“Some of the comments made were talking about how missing class hurts a student’s grades enough, and by the school, implementing an additional punishment, students feel that the school is in no way supporting them,” Schmitt said.

Jones said that the email stating the Zoom policy was just a reminder of the policy already in place and that it was in order to ease the burden on professors waking up to a large number of requests from students to Zoom into class. He said it is also to maintain equity because some professors may grant requests while others may not.

“Our intent was not at all for that to seem insensitive or uncaring towards students, fully recognizing the range of difficult experiences that students might go through including allergies, illness, flat tires, all of those things,” Jones said. “But just that we would continue to deal with those in the same ways that we did prior to having to access.”

Jones said if students wake up not feeling well or have an issue like a flat tire, they should just not attend class and make it up the same way they would have pre-pandemic. He said this amount of time is easier to make up, while time periods like the 10-14 day quarantine period would cause an insurmountable gap in education if students missed classes rather than using Zoom.

In response to concerns about Lunsford, Jones said that she is one person dealing with 900 students during an unprecedented time. He encouraged students to be patient and said that professors can decide that absences are excused or unexcused without her notifying them of a medical reason for a student absence.

Students described instances that may cause them to miss in-person classes unrelated to COVID-19, like surgeries with long recovery times. Jones said this is an acceptable reason to use Zoom instead of missing class.

Future use of Zoom

Schmitt asked if Zoom would be used after the COVID-19 pandemic. In response, Prather explained that while virtual classes have been helpful during the pandemic, he is concerned that overuse of them post-pandemic could cause the college to lose its identity.

Dalton asked if Prather’s vision is to go back to absolutely no virtual instruction or if he has considered adapting virtual learning as an accommodation for special circumstances like surgeries.

Prather said the college is putting together an after-action report to identify what was learned during the pandemic and what procedures should be kept in place. He showed hesitancy at the idea of Zoom classes becoming common at Franklin College.

“If we left the thing wide open, we would have no identity at all. We’re not virtual delivery of education,” Prather said. “There are places far better and far less expensive than us who deliver that.”

He acknowledged that Zoom capability may still have a small place in future learning at the college.

“On the other hand, it’d be foolish to see advantages that we should access and throw those out the window,” he said.

Dalton asked if snow days would become virtual learning days now that the college is equipped with Zoom.

“I couldn’t live with myself if I declared a snow day and expected everyone to go to class in a different format,” Prather said. “Snow days are to pull the covers over your face, go back to sleep and just test yourself on how long you can sleep that day.”

Prather said summer classes may have a hybrid option, but it will all come down to deciding how to serve students best.

“That doesn’t always accommodate convenience, because that comes at the expense of our mission,” he said.

Jones said he and Flora are working on drafting language that will explain to students when Zoom accommodations will be available after the pandemic is no longer the main concern.

Dalton spoke on behalf of  students, saying that frustrations are sometimes not with college policies but with the communication.

“I think that a lot of times students aren’t as aggravated as they might seem,” Dalton said. “I don’t think they’re aggravated at the actual protocols, like having to have a reason to join on Zoom. I think the frustration comes from that lack of communication or that lack of clarity in distinction between what’s allowed and what’s not.”

Prather acknowledged that there have been some issues as the college had to adapt quickly to the pandemic and learn along the way.

“It’ll be a cleaner policy in the fall because we have this experience under our belts,” Prather said.

The controversial mask mandate was changed to an advisory on April 6 by Gov. Eric Holcomb wh…