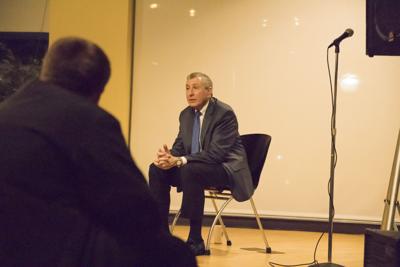 Co-Executive Editor Taylor Wooten sat down with President Kerry Prather to discuss the announcements made at Gov. Eric Holcomb’s recent coronavirus reflection, including the transition from a mask mandate to a mask advisory and vaccine distribution opening to college students and other Indiana residents over 16 on March 31.

Taylor Wooten: So, with the new information from Gov. Holcomb, I know you acknowledged it [in an earlier email] and said nothing in Fortify Franklin's going to change. But I was wondering, since the capacity limits are going to be controlled by local health departments, if there's been any communication with the Johnson County Health Department so far?

President Prather: We will Taylor, as far as the groups go, what the governor's decision does is it takes away, kind of the whole mandate. So the statewide mandate, I think what we're going to find and certainly what our healthcare partners locally have advised, is that businesses will likely maintain their requirements to be for people to be masked and distanced. You know schools certainly will. We will until we get to a point where I think the actual scope of the vaccinations give everyone enough comfort to begin to think differently and we're a ways away from that yet. On the one hand, it's a very positive thing that we're on the brink of anybody from 16 over being able to be vaccinated. On the other hand, part of the reason there are so many vaccines available is because a fair percentage of the population in Indiana has chosen not to take it. So everybody's going to have to work through both of those dynamics to figure out, ‘how does that inform your policies, moving forward?’ So I think we will be talking about this much more with reference to the fall semester than the completion of the spring semester.

TW: Right. Yeah, and then that also brings me to something I know I've definitely asked before, but now that it's closer to the time for college students to be able to get the vaccine like, ideally, March 31. But who knows how that system will go and everything with everyone trying to sign up at once. Do you foresee it becoming a requirement for the remainder of the semester or to be on campus next semester, or just have there been discussions about that?

PP: I don't think any organization other than, probably including healthcare facilities will require a vaccine, until it is no longer a product of an emergency authorization, because there's just too much legal liability involved in that. What you may find is that certain liberties, within an organization may be confined to people who have been vaccinated. But to require someone to take it, I think the vaccine is gonna have to move from emergency authorization to standard authorization. And then I think in the blink of an eye, it becomes measles, mumps. What else do we need to take as a matter of... Hepatitis and COVID. Because, and especially in a setting like ours where you have cohabitation in addition to proximity and classrooms and so forth.

TW: Do you plan on maybe encouraging students or faculty to get the vaccine?

PP: We're going to do everything humanly possible to encourage that. As a matter of fact we just talked in cabinet yesterday about contacting Deidra to shift some of our social media, internal marketing to ‘please be vaccinated, please be vaccinated, please be vaccinated.’ And I think that's for everybody. Most organizations right now are strongly encouraging [getting the vaccine]. Including, you've got some private businesses that have just been laying cash on the table. You know, if an employee will get vaccinated, bring proof of vaccination, they can get $500 bucks, so it's in everybody's interest. But you know there's, there's a certain subset of the population for a host of reasons, not the ones who literally shouldn't, which is a tiny percentage of the population, but just some folks who just won't.

TW: Right. And then, I was wondering, but also with this kind of development, if there was any concern about people traveling to places with loosened restrictions or maybe even just being in places where there aren't strict masks requirements.

PP: Honestly, we've lived with that potential Taylor because we don't, we have such a mobile student body that even the schools who claim to be limiting travel, I've yet to see a plan where that was actually feasible. So, you know my plea this morning to our students is just be smart where you go, be smart about what you do when you get there, knowing that it is still possible for you to bring back an infection, which could cause your own illness or it could cause somebody else to become ill. That's my concern about the governor's mandate. The governor wants the people off his back who don't like government mandates, you know, but it is not an all-clear, and that was the first thing Dr. [David] Dunkle and other health care professionals said was, you know, if you read this as ‘take off your mask,’ you're making a big mistake. It's just too early.

TW: Yeah and the way I understood it, I feel like you've said before that we can only control our environment, so I thought that the email reminder and also the requirement for the reentrance testing are kind of trying to mitigate anything that might, you know.

PP: I was so proud of Dean Jones, his staff, the athletic training staff to be able to come up with [the on-campus reentrance testing] because what we realized was, it's not like coming back from a two week break or a three week break. There's not enough time for students to turn around their own testing. So it's going to be a heavy lift for us but I think everybody will feel better that we've still had that checkpoint before students come back to us.

TW: Alright. I didn't have too many questions, but was there anything else that you wanted to share with students that wasn't in the email before spring break?

PP: No, I just, I'm so grateful, and I tell everybody that, you know we've succeeded at this because our students have, you know. The prospects of the adults on campus falling in line was never questioned. The issue was, to what extent were students willing to accept the mitigation protocols in exchange for being able to be in person? The answer on this campus has been remarkably well. So, I'm so proud of them, and that's a good motivation for as we can loosen up on some things, we should. And so we're starting to see that with athletic events and student organizations being able to meet outside, some art and music events that we've been able to have some parents in. And I just think with each step this will feel more and more like we're getting back to where we want to be, back to normal. So hats off to the students, they've done a great job. Please keep doing a great job over spring break. Don't go to Miami, stay away from Miami.