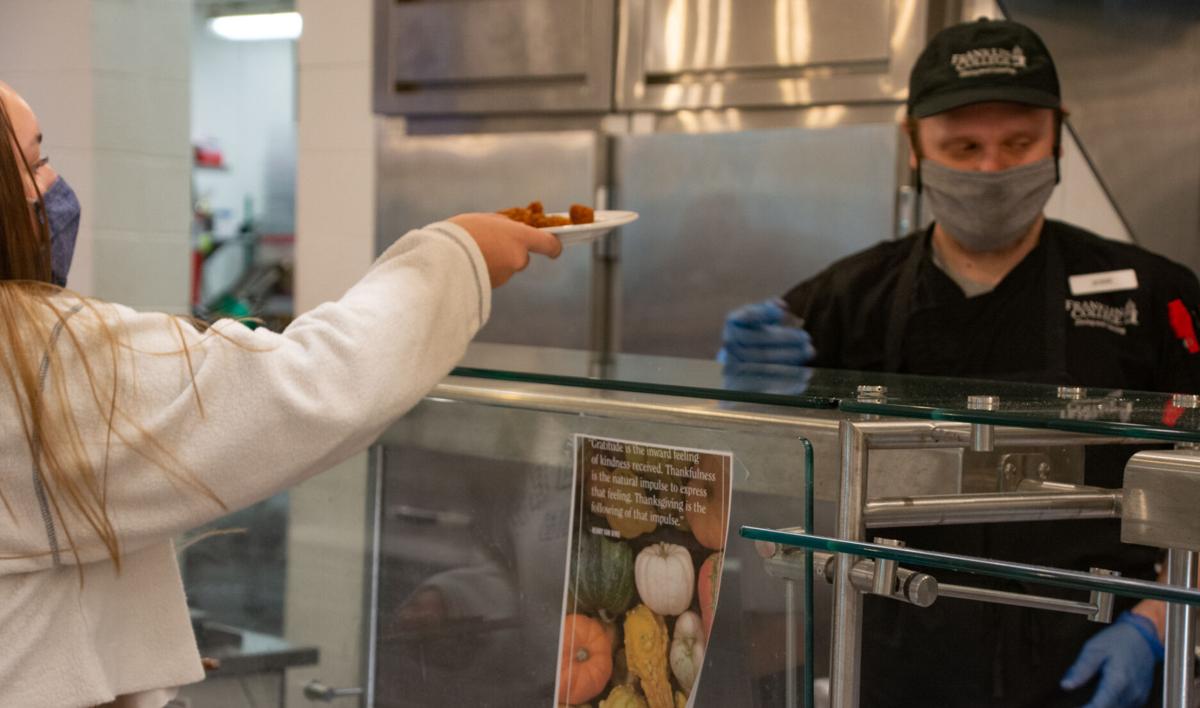 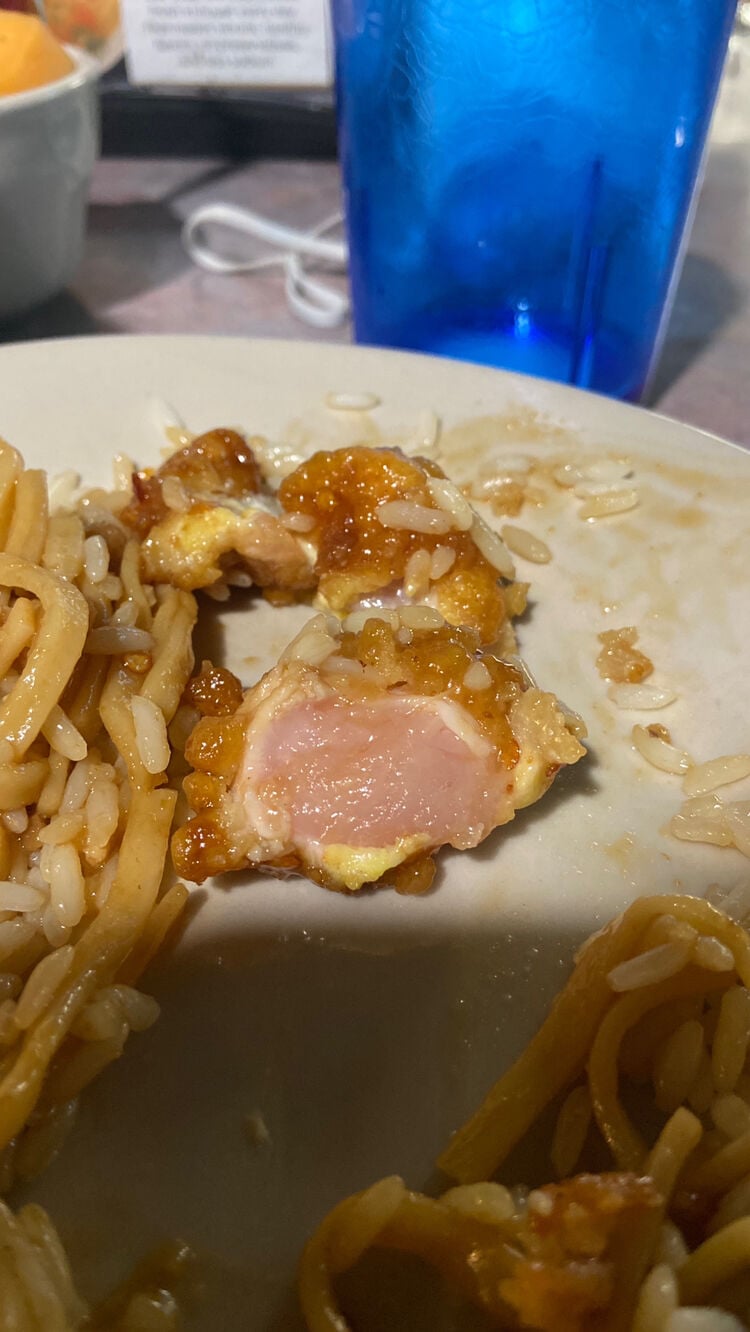 Undercooked chicken rests on a Matthew Early's plate in the cafeteria. Early posted the photo in the GroupMe student chatroom for his peers to see. 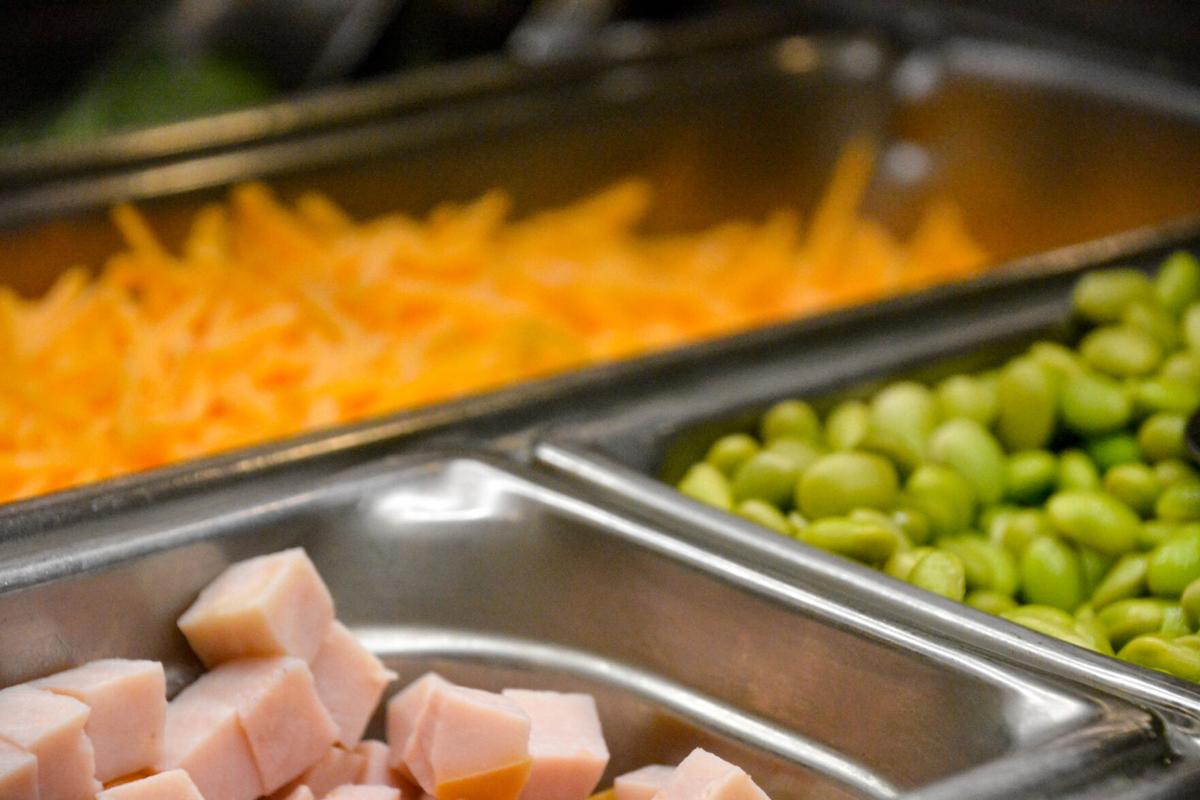 The salad bar has returned to the cafeteria this fall after a hiatus caused by COVID-19.

Undercooked chicken rests on a Matthew Early's plate in the cafeteria. Early posted the photo in the GroupMe student chatroom for his peers to see.

The salad bar has returned to the cafeteria this fall after a hiatus caused by COVID-19.

At the campus chat Wednesday, “Let’s Talk about Parkhurst Dining,” students gathered to express concern about their dining experience.

Many have noticed a low quality of food, and several have posted pictures of undercooked food into a public student chatroom on GroupMe. In a Monday email, Dean Andrew Jones encouraged students to attend the event to share their thoughts directly. Dozens of them did.

Executive Chef Chris Bator said the unsafe food is “unacceptable” and the problem will be addressed.

Jones attended the chat, alongside President Kerry Prather, who asked students to engage in targeted discourse.

“Although I know it’s convenient, it’s not helpful to have this conversation on social media and then we never find out about it,” Prather said. “We have not heard through normal channels of communication that we have an issue.”

Deva Duncan, Franklin College dining services general manager, said students should use the new online reporting mechanism, which was included in Jones’s email to the student body and is posted on the cafeteria dining board, to vocalize about dining matters. They can scan the QR code and submit a virtual comment card that will be sent directly to Duncan.

Senior Brogan Sanders has been outspoken in the student chat room. He expects Parkhurst to make mistakes but said undercooked food is crossing the line, especially when students pay for it.

“As a professional food service, I feel like it’s on them. They should have it figured out,” Sanders said. “I feel like they’re struggling with what they’re doing.”

At the chat, Prather said that students should consider the fact that the service industry is experiencing short-staffing and note that it isn’t easy for Parkhurst to find workers.

Sanders said there’s no excuse for improperly cooked food and said that student congress should speak for the students to lighten their responsibility.

“I feel like the people that do go to the campus chats that are in the group message should explain our beliefs and stand up for us if we’re all a student body,” Sanders said. “We all shouldn’t have to go.”

But Lucas Hinderliter, student congress treasurer and dining committee member, said direct communication is best. Student congress, he said, can’t represent this campus’s diverse opinions, so they just offer a platform for others to project.

“I understand people are frustrated. Everyone is frustrated. But we’re the middle ground between the two bodies,” Hinderliter said.

Hinderliter said that student congress decided to host the chat, which was originally planned for March, as a reaction to growing concern among the student body.

Junior Claire Cherry said she has a bit more hope that the food will improve after the campus chat, but she will remain skeptical.

“I don’t really have high expectations that much will change… anytime complaints have happened before, it really only gets better for a day or two and then goes right back to what it was,” Cherry said.

That’s why she held a meeting with Prather and Jones. She thought they would listen, and they did. After the campus chat, Jones joined The Franklin for a podcast session to debrief thoughts.

“They were both very receptive to what I had to say. They were also appalled with the photos of undercooked food.”

As of now, Cherry said her concerns haven’t been addressed. Because she is worried about getting sick from the cafeteria’s food, she buys about $50 worth of groceries a week. When she shows Parkhurst employees improperly cooked food, they simply give her a new plate and don’t seem to tell their boss, she added.

Freshman Brianna Bergen was surprised to hear that not all of the cafeteria’s fries are gluten-free. She has Celiac disease, and for those affected, this immune response to gluten can damage intestinal lining and limit one’s ability to absorb nutrients.

Bergen tries to avoid gluten but said that Parkhurst employees don’t keep her informed. She emailed Duncan in early October, who replied by saying that all of the cafeteria’s fries are gluten-free, which is false. At the campus chat, Bator clarified that some fries are and some aren’t because there are supply shortages due to COVID. Bergen said she is more frustrated by the fact that she wasn’t updated than the fact that she was given false information.

“I’ve been eating their fries, and I’ve been getting sick,” Bergen said. “It’s a little disheartening to hear that it’s been a change with COVID, and they didn’t tell a student directly that has had issues with it.”

Senior Tyler Placke said he liked the former food company, Sudexo, better because they cooked their food upon request, which ensured that it was fresh. Still, he’s glad that Parkhurst has made some changes since they arrived.

“There’s some concerns that are being heard. My freshmen year, there really weren’t any options—maybe one option per meal—for someone who is vegan, vegetarian or gluten-free,” Placke said. “I think that’s great. There are people who need to eat differently.”

But he said he is frustrated by the lack of food safety. He doesn’t want to blame any individual for the problem, as staff turnover may have played a major role, but he said it must be addressed.

Duncan and Bator said they were pleased with the high student turnout. Duncan likes it when students ask questions.

“Your voices are important,” Duncan said. “I will answer everyone.”

Bator said he has responded to the gluten-free demand by purchasing a purple kitchen kit. With specific tongs and cutlery, it will be easier to restrict the kits usage to gluten-free food. He also said that his staff will make a gluten-free pizza or pasta batch upon request.

As for food safety, Bator said he is implementing a three-part test to ensure that meat is cooked thoroughly. There will be an initial temperature check, then cooking temperature will be increased by five to 10 degrees above the current level and the server will check a sampling from the tray to ensure its safety.

Some students feel that they shouldn’t have to police the food available to them. However, Duncan said that she and Bator cannot know what all students think about the food unless they share their thoughts using the comment cards or a conversation.

“That’s next to impossible for two people to know,” Duncan said.

Bator said that students should be as specific as possible in detailing their comments. He needs to know what day and what time any problem transpired, otherwise it’s difficult for him to craft a solution because each shift has a different set of workers.

Following the campus chat, Jones said he has received emails from six students and has spoken with two. Most of the feedback he’s accrued has been negative. Bator said that students likely have good comments, but he doesn’t hear about it as much because people mainly become vocal when they’re upset.