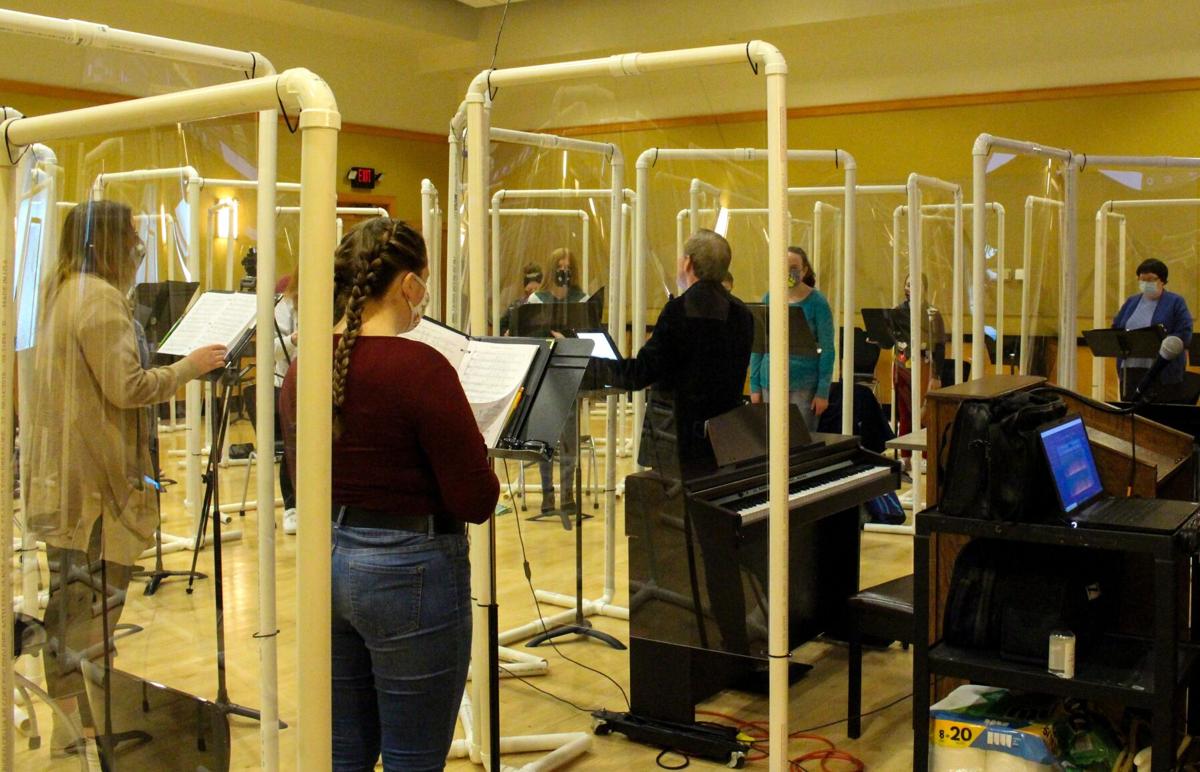 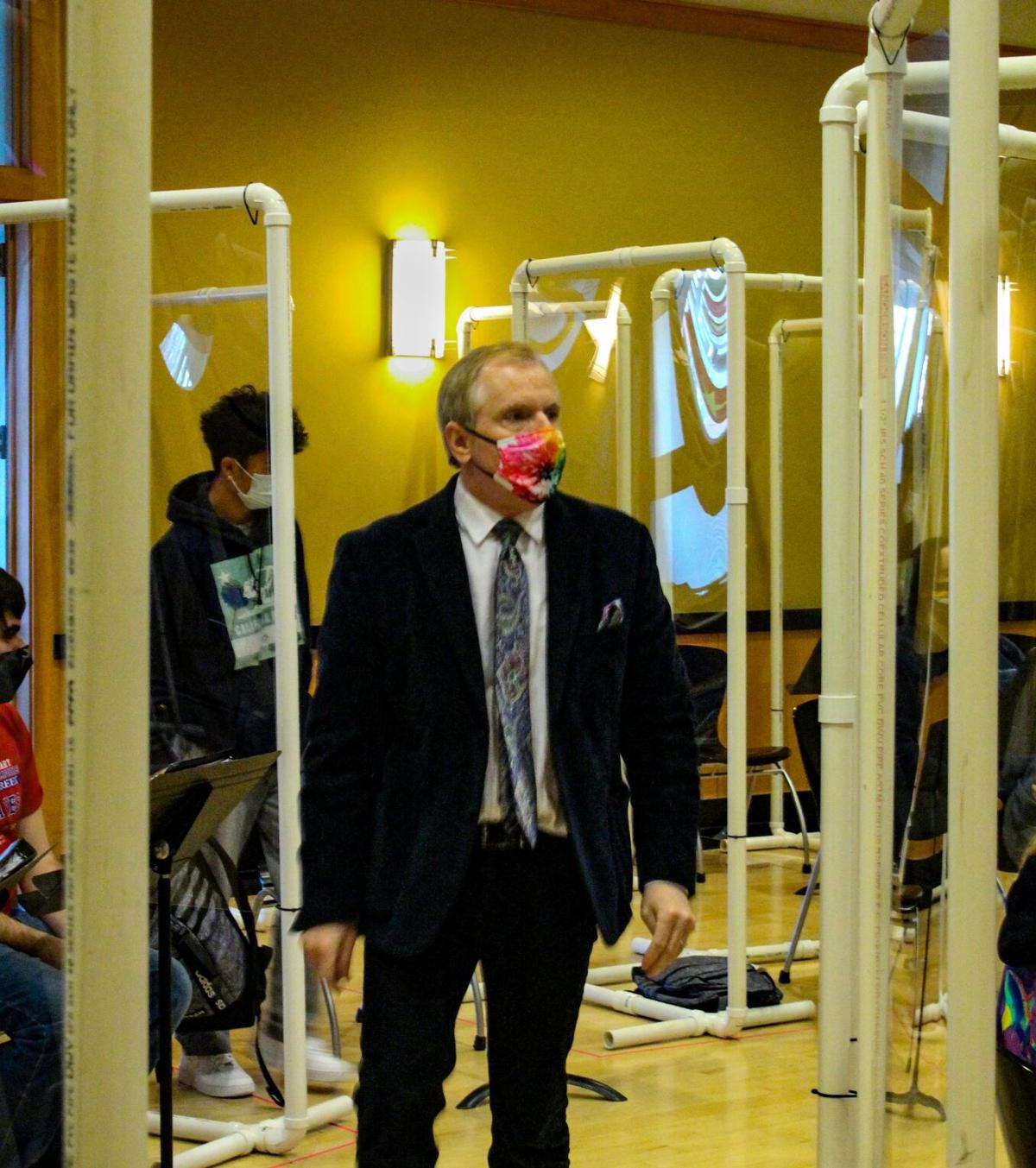 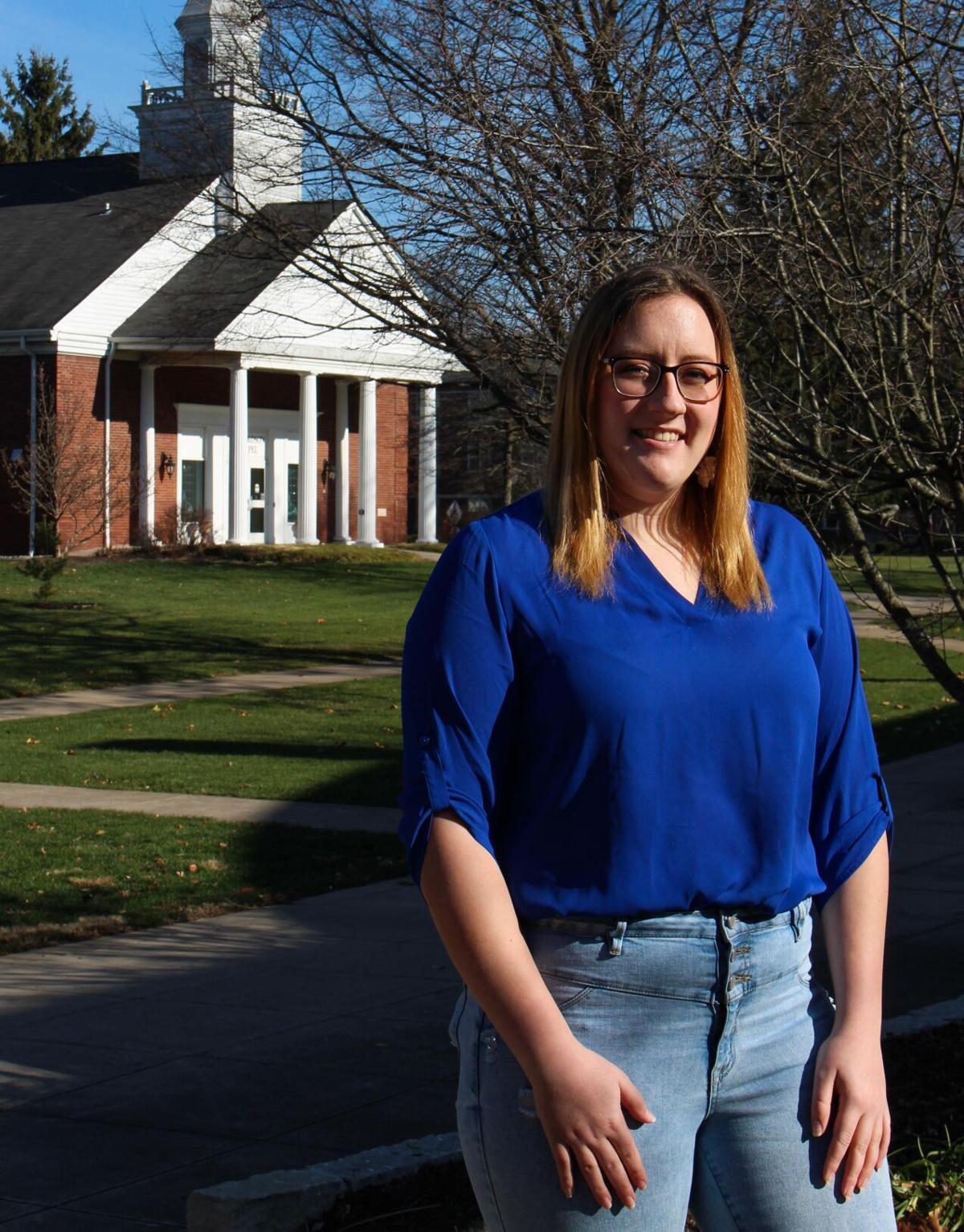 Casey Hayes, A.J. Thurston endowed chair of music and director of choral activities, has done everything in his power to enable Franklin’s choir to continue to sing during a year defined by COVID-19.

His semester has been challenging because it’s difficult to conduct when the students can’t see him and he can’t hear them effectively, he said. Plexiglass partitions that confine each student to their own personal space warp and blur students’ ability to see.

Because of these difficulties, the group’s growth has stalled, but Hayes said they will be able to pick back up right where they left off in the spring, unlike other schools that cancelled choir for the semester. Most nearby colleges—including Indiana University—have taken that route, so Hayes is grateful that choir has continued at Franklin. He is also proud of his students for persevering through the difficulties.

The college fully supported his efforts to continue in-person learning, Hayes said, especially once he sent them scientific studies that demonstrated how the activity could be conducted safely.

“We could not have asked for anything more…They bought into it from moment one,” Hayes said.

But since the transition to online learning, which will continue until the semester’s end, running choir has been quite hectic. Some of his students are quarantining and others feel obligated to stay on campus, although that’s not their first choice.

“Since we were not asked beforehand about how we thought, we had to make it up on the fly,” Hayes said.

Hayes was aided in planning choir this semester by his friend, an outgoing CDC employee. With this guidance, Hayes devised a set-up that allowed six-foot distances among students and used Plexiglass screens to block spit droplets that travel through the air. Hayes said that these steps, along with the wearing of masks while singing, fostered the safest possible environment for the program.

This is not the first challenge Hayes has faced during his time at the college. When he was hired as a faculty member years ago, there was no music program aside from a choir of seven and a pep band of five, he said.

He has been working to build up the music department ever since, carefully hiring all the music professors and lecturers that have joined Franklin’s faculty. He has also worked to find the ensembles rehearsal spaces, as the Johnson Center for Fine Arts lacked rooms large enough to host a band or choir.

“We had to create space to exist because this building was designed so poorly. It was not designed for music,” Hayes said.

Despite all that work, Hayes said that choir is about much more than just rehearsal time: It is about friendships.

As Hayes reflects on what it’s been like to run choir this semester, he can’t avoid thinking that it will always be a bit changed. He said he hates how much stress COVID-19 has put on his students.

“I am grateful that we were able to do it, but I will be so glad to see it in the rear-view mirror. I do not want to even revisit it,” Hayes said.

Still, he said that doing his job this year has been easier for him than it has been for others.

“Every choir director is faced with the same issues right now. I just feel that because of the college, I’m faced with a lot less issues,” Hayes said. “We get to have choir and other schools don’t…We’re very fortunate.”

This semester easily could have been a step backward for the group, she said, but Hayes didn’t let that happen. There was much confusion in the wake of the virtual learning announcement, but she said that students still wanted to show up to class. She attributed this to the social bonds that have formed in the group.

“You develop almost a family aspect with choirs,” List said. “That can be a really good support structure.”

List joined the choir her freshman year and has stuck with it ever since.

“Seeing it grow and seeing the talent develop out of that program—It’s just really awesome to see, and I’m really grateful for having been in this choir,” List said.

As a music major, she is studying to be a choral director after graduation because she loves singing and wants to share the joy with others. She said that Hayes has been a terrific role model who has pushed her to new heights. In the women’s chorus, he is letting her conduct one of the songs for their upcoming performance, so she now understands how difficult it must have been for him to conduct this semester.

“The sound moves weird in there,” List said. “It’s definitely a challenge both as a student and as the person that’s up there directing.”

Through her participation in choir, List said that she has become more outgoing and outspoken. She has also developed the professional skills needed for her career path.

Freshman Jason Arbogast is also glad that choir meets in person because it gives him a chance to see his friends and maintain a sense of unity among his fellow singers. Yet, he said had a peculiar first impression of the class.

“When I first stepped foot into the choir room with all those plexiglass things, I was like ‘What is going on? What is this?’” Arbogast said.

Even aside from music, Arbogast said that his freshman year has been an odd one due to the coronavirus. Nonetheless, he is enjoying his time at Franklin College. He said he might not be here if it wasn’t for Hayes, who judged one of Arbogast’s vocal quartets in high school and convinced him to come to Franklin, where he has since earned the student’s respect as a director.

“He’s phenomenal… He knows what he’s doing, he’s got the talent—obviously—and he’s just a great all-around guy,” Arbogast said. “My first impression of him was ‘I love this guy. I want him as my director.’”

Now that he’s here, Arbogast is considering taking up a music minor in addition to his exercise science major. Despite the challenges that this semester has brought, he is optimistic about his future at Franklin.

“I’m excited for the next three and a half years of music—seeing where it will take me and how much better I can get,” Arbogast said.

The choir is recording an audio performance to share with the community, which should be published online in the coming days.