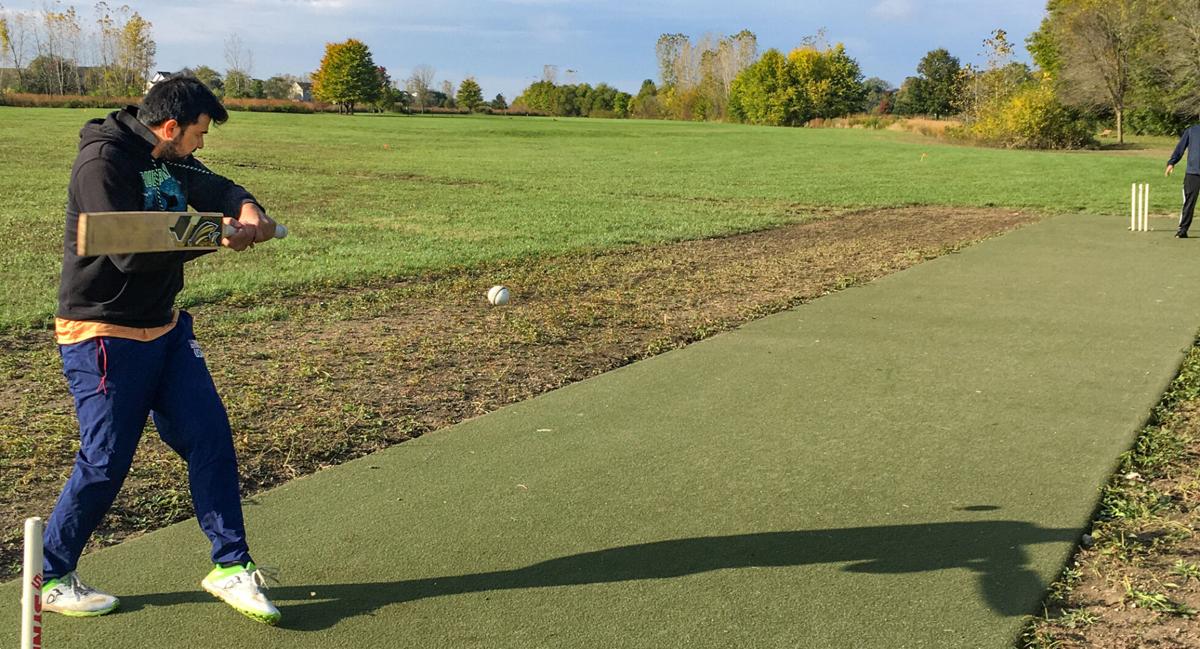 Gaurav Gholiya takes a swing at a cricket ball as a warm-up before last Sunday's match. He said Franklin College would be a good site to host a league sometime in the future, but he is unsure if the players will pursue that option. 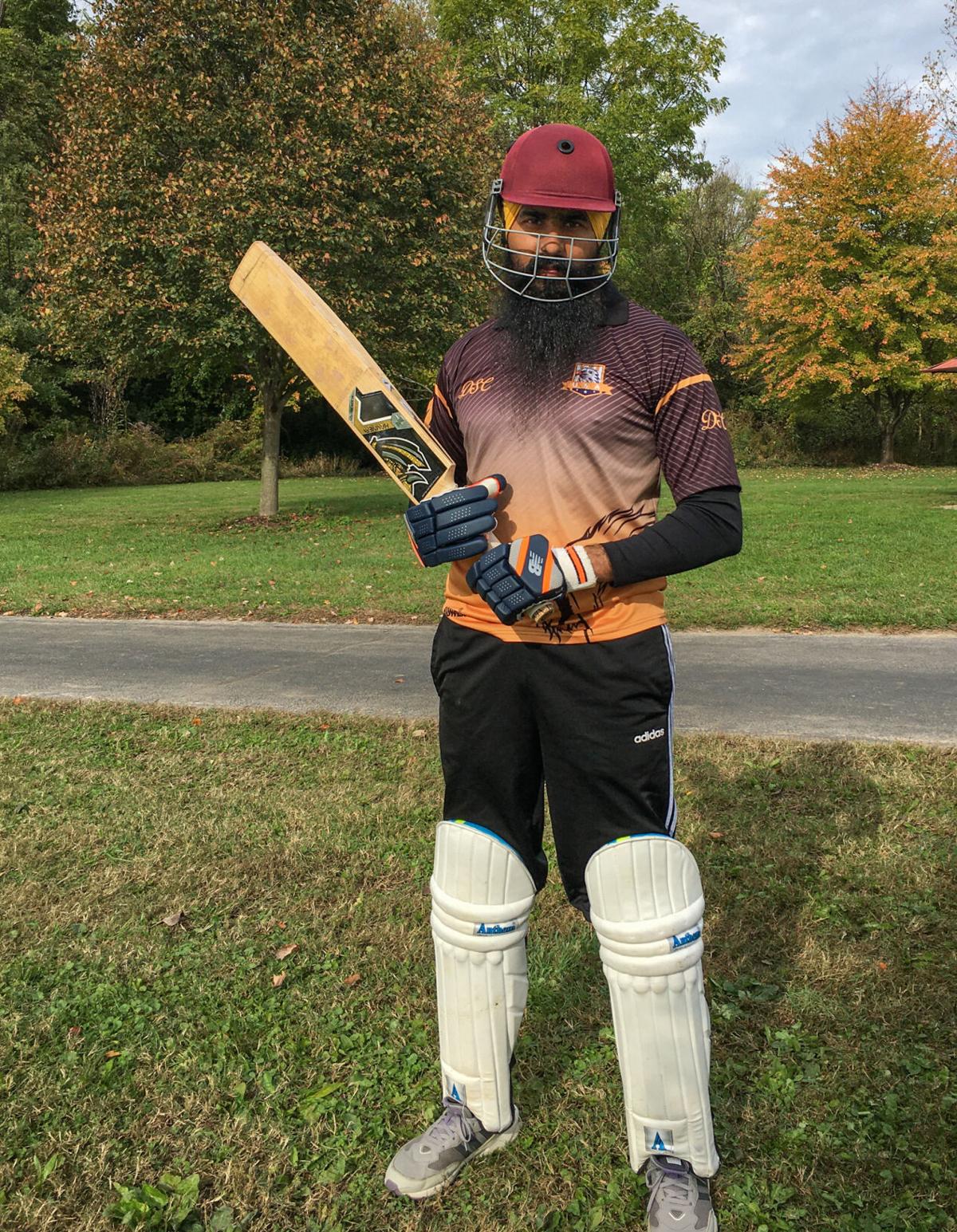 Mann Singh prepares to enter the game as a batter. On the sideline, huddled around a picnic table, the other players talked about the game and ate a fried pastry dish called samosas. 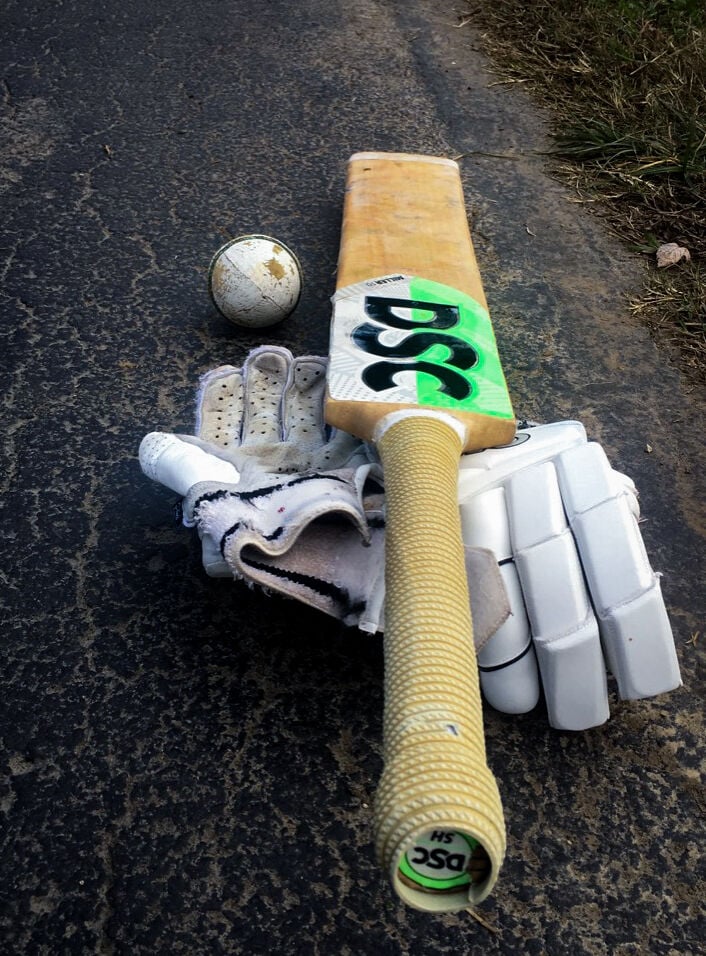 A cricket bat, ball and gloves rest on the paved trail at Blue Heron Park in Franklin. South Asian immigrants living in the Greenwood area started playing the sport in the park this summer.

Gaurav Gholiya takes a swing at a cricket ball as a warm-up before last Sunday's match. He said Franklin College would be a good site to host a league sometime in the future, but he is unsure if the players will pursue that option.

Mann Singh prepares to enter the game as a batter. On the sideline, huddled around a picnic table, the other players talked about the game and ate a fried pastry dish called samosas.

A cricket bat, ball and gloves rest on the paved trail at Blue Heron Park in Franklin. South Asian immigrants living in the Greenwood area started playing the sport in the park this summer.

In Franklin’s Blue Heron Park, one will mostly see dog walkers and an occasional disc golf player, but on some weekends, the crisp sound of wood colliding with cork enlivens the atmosphere.

Some Franklin locals might be surprised to see dozens of men playing cricket in their geographical backyard, but player Sunny Yadav said that the sport is more common in the area than most people think. His team—the Greenwood Lions Cricket Club—is part of the Indy Premier Cricket League, which is currently hosted by Franklin. He lives in Greenwood but is originally from India, which is a hub for cricket fans and players.

“It’s in our blood,” Yadav said. “Where you find Indians, you’ll find cricket.”

Cricket is a game that spread throughout the world by means of English colonialism. It is similar to American baseball in that there is a batter and a pitcher (called a bowler in cricket). The objective of the game is for the batting team to knock down the three stumps stationed behind the batter, who does his best to whack the ball as far away from the pegs as possible.

Yadav said that all the kids in India play the game in the street. He was no exception and has been playing since he was around 6 years old.

The story is similar for Indianapolis resident Keshav Batra who said that playing cricket reminds him of his childhood. He is a member of the Dasmesh Sports Club team that competes in the Franklin-hosted league. Like many of the players, he is originally from the north Indian province of Punjab. Others on the team are from Bangladesh and Pakistan. Most of the league’s players now live in the Greenwood area, he explained.

Batra said the Blue Heron Park pitch, the central strip used by the bowler and the batter, was installed over the summer. The rest of the playing field is just grass, like the outfield in baseball.

"The cricket group approached the parks department and they were seeking land to use for a field.  I took them to a couple of parks that we had open space in and we decided that Blue Heron best fit what they were trying to accomplish," Stultz said.

The players use the grounds nearly every weekend. Stultz said it's the first time that a Franklin park has hosted cricket.

Batra said cricket helps the players relax. They mostly work Monday through Friday in technology departments and various trucking businesses, so they give one day of the weekend to their families and the other day to a remnant of their childhood, he said.

“This is one game we go to if we are happy, sad, or whatever. It’s all emotional for us,” Batra said.

Yadav said it wasn’t difficult to adapt to the United States. Moving to a new environment can present social challenges, but that wasn’t a huge obstacle for him since he is a social person.

Mahal agreed with Yadav that conforming to a new culture wasn’t as daunting as he expected.

“It’s not that hard to find someone with common interests,” Mahal said. “Over the past five or six years there’s been a lot of diversity.”

Batra also said he is doing well socially. He is friends with Mahal and his other teammates now, despite the fact that some of them favor different professional teams.

“I am still in shock after that loss,” Yadav said.

Recent news from the region shows that the competition goes beyond the sport. When medical students cheered for Pakistan in a hostel in India’s Kashmir province, an anti-terrorism investigation ensued. Five people in the Uttar Pradesh province were arrested on charges of sedition for speaking disparagingly about their national team.

The players in the Franklin league are aware that there is much tension between India and Pakistan. One of them compared the South Asian cricket rivalry to political tension between the United States and North Korea. However, Batra said that cricket never gets in the way of his friendships with his teammates. In fact, the sport strengthens their ties, so they are going to continue playing.

Batra said the league participants are strategizing for the future. They want to start earlier in the year and with more teams. The harshness of winter prevents them from playing year round like in India, but they can manage well overall.

“We are more than welcome if anybody else wants to join us,” Batra said.

The league participants are currently working to secure another pitch, likely closer to Greenwood. The sport is on the upward trend according to Yadav, who estimated there to be 200 cricket players in Indianapolis.