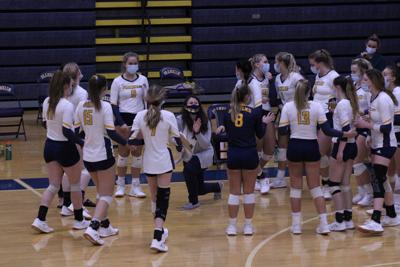 Volleyball Coach and Assistant Athletic Director Mary Johnston was named Heartland Collegiate Athletic Conference’s Coach of the Year for 2021. Her athletes said this honor was well deserved for the way she supports them and serves as a role model for the team.

Junior libero Allison Thompson was also honored in 2021, earning the title of HCAC Defensive Player of the Year. She attributed this victory to Johnston’s motivation.

“Her belief in me always pushes me to do better,” Thompson said. “Because every year, last year and then this year, she'd be like, ‘I know that you're the best libero in this conference and you're going to prove it to everybody else.’”

Thompson also said Johnston’s coaching allowed her to become a leader and earn a role as team captain.

“[In high school] I wouldn't speak up for myself, I wouldn't... if the team was struggling, I would never say anything,” Thompson said. “But now because of all of her belief in me, I feel like I'm an important part of the team.”

Johnston has a unique way of getting to know and supporting the women on her team.

This begins with a DISC Assessment personality test she has them take at the beginning of their freshman year in order to learn how she can best push them as athletes. Senior Abby Sewell said this helped Johnston pull her out of her negative thoughts.

“She really focuses on trying to figure out how to best approach each player,” Sewell said. “So I think that helped me. She knew that, like while she wanted to push me and she was good at pushing me out of my comfort zone, she always could tell when I was getting frustrated and was good at like talking me down through that process.”

She then meets weekly with the freshman players to check in with their college transition. These meetings continue as they get farther into their collegiate career, but less frequently.

When COVID-19 forced volleyball to cancel their season, she found ways to keep them engaged by setting up a team Moodle and listening to podcasts. Thompson said this was to keep the team motivated and excited about volleyball during the difficult time.

Thompson said that unlike some coaches she’s had in the past, Johnston wants all the input she can get from her athletes.

Johnston said this past season was the culmination of three or four years of growth for the team, which showed in the team’s 10-6 record and No. 3 spot in the HCAC.

Outside of coaching and working in the athletic director’s office, Johnston spends a lot of time with her two kids. She said they are at a “fun age” at two and four years old and the time with them allows her to embrace her inner child.

She also enjoys live music at outdoor concerts and said she got really into rowing recently.

Johnston is content in her current role, which was preceded by moving five times in the span of three years for college and work. She said these transitions were difficult because she’s an introverted person. When she took the role at Franklin in 2010, she wanted something more stable.

“If you told me 10 years ago I would be here, I would be very impatient,” Johnston said.

When asked what she enjoyed the most about coaching the women on her team, Johnston paused and laughed.

“They're just funny, they're just good people and good students, good kids, good young women and they want to get better and they are kind to each other,” Johnston said.

Thompson said Johnston handles all of her responsibilities well and it makes her easy to look up to. Sewell agreed that she sees Johnston as a role model.

“I've looked up to her a lot as like an empowering woman,” Sewell said. “She is very passionate about empowering young women to step up, both in sport and just in the professional world, so that's something I've also really liked about having her as a coach.”

Johnston said she hopes her coaching has helped the women on her team build confidence and pass it on to others throughout their lives.

“I hope that they feel supported by our staff, and that they leave here feeling like they are confident and strong enough to know who they are and be who they are and then grab somebody else and bring them up with them,” Johnston said. “Just looking back and paying it forward is important.”