The book that spurred the film was inspired by the West Baden Springs Hotel in French Lick, Indiana (pictured here). Author Michael Koryta is a New York Times bestselling author. 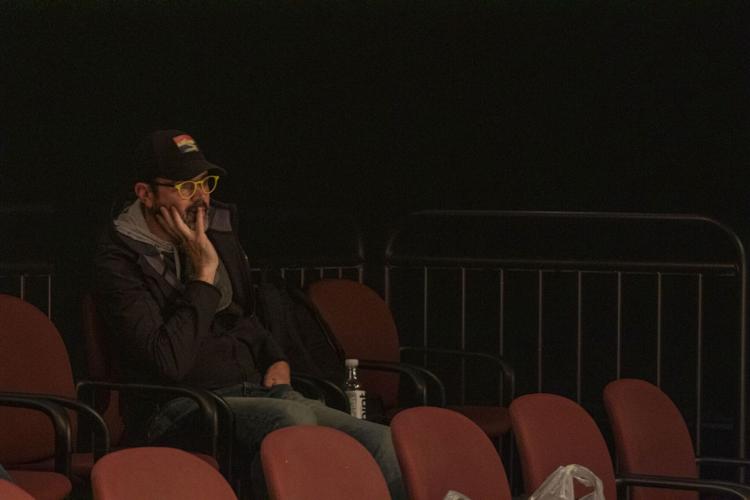 Gordon Strain watches a rehearsal of “The Submission,” the theatre

department’s most recent production. He helped director Nick Crisafulli with

However, the book So Cold the River, which recently has been adapted into a movie has guests feeling spooked.

“We’ve kept the decor of Erica’s room [the main character] in the movie the same, so it has the same feel to it and people have said they have stayed there and get kind of freaked out,” said Justin Harris, who works in facilities for         the hotel.

The hotel shut down for five weeks for filming, right before the COVID-19 pandemic started.

“It was almost eerie,” Harris said. “It was very quiet. They modified the lighting for the picture. It was a very unique experience.”

Harris had a small part in the film by accident. The art department needed a stand-in of the part where the guy in the photograph turns and looks at the main character. Since one of the actors was out they asked him to step in. When he watched the trailer he wasn’t expecting to see himself.

“When they released the trailer I got to see myself on the trailer and I was like ‘This is really cool, maybe I made the cut’ and sure enough it was in the movie,” Harris said.

The movie was made possible through the work with director Paul Shoulberg in collaboration with Pigasus Pictures. The film company is based in Bloomington, Indiana and while it doesn’t have the same budget as some Oscar films, it is still gathering fans.

After making its debut in small local theaters across Indiana it quickly made the top 10 movies on the Apple store.

“It was certainly our biggest film to date,” said Artist in Residence Gordon Strain. “It was great partnering with the town of French Lick and West Baden because we needed so much help from the town for extras, for construction stuff ... to have an entire town rally behind this movie and work on it, it was great.”

Strain was a co-producer for the film and is a co-owner of Pigasus Pictures, though he didn’t quite expect to find a passion in film.

“When I was younger I would make little home movies with friends. I never thought I would get into film,” Strain said. “When my friend started Pigasus Pictures in 2015 he called me to design the first film and it was so different than theater and fun and invigorating, just made me think in a whole new way.”

Strain has worked in theater for as long as he can remember and really enjoys balancing theater and being creative in a different way with film. Strain has worked at Franklin College as a tech director for over a decade along with Assistant Professor of Fine Arts-Theatre Nick Crisafulli.

“He’s a big picture thinker who is always wanting to be pursuing a project,” Crisafulli said. “We can have a smooth working situation.”

While shooting the film in French Lick the cast and crew lived at the hotel for five weeks. Strain helped create one of the main “characters” of the film which was a glass bottle that would change often.

“One of my jobs was to create the bottle and put the logo on it. Because the bottle was used so much the logo would chip off so I had to constantly replace that,” Strain said. “I remember getting a call at like two or three in the morning and they had a problem with the bottle so I had to go fix the bottle. My daughter was asleep in the hotel room and I was in the bathroom with the lights on trying to fix it in there.”

When the book was originally being offered to be adapted, productions in Hollywood did not know West Baden Hotel was real and wanted to recreate the hotel on       set lots.

The current state of the hotel was finished in 1902 with the largest free-spanning dome hovering over its atrium prior to the Coliseum in North Carolina being built in 1955.

He said there is a room up in the dome of the atrium called the angel room. Harris said at some point in the history of the hotel an artist painted angels in the room but over time it has been graffitied over.

The warm glowing lights that fill the hallways, historic tiled floors and stained glass windows was the perfect place for author Micheal Koryta to base his psychological thriller. Just like most movie adaptations, this one certainly has some differences compared to the book.

Taking an over 500 page book and adapting it into a film was no easy feat. While filming took five weeks, it took over two years to plan and edit.

“A Marvel movie has a lot of money and can get it done faster. We have less money so we get the same great editors but they just do it in their free time so it takes longer,” Strain said.

A few of the people that worked on the film received glass bottles identical to the ones used in the film, which are now missing and no one knows where or why.

The Franklin | Next Steps