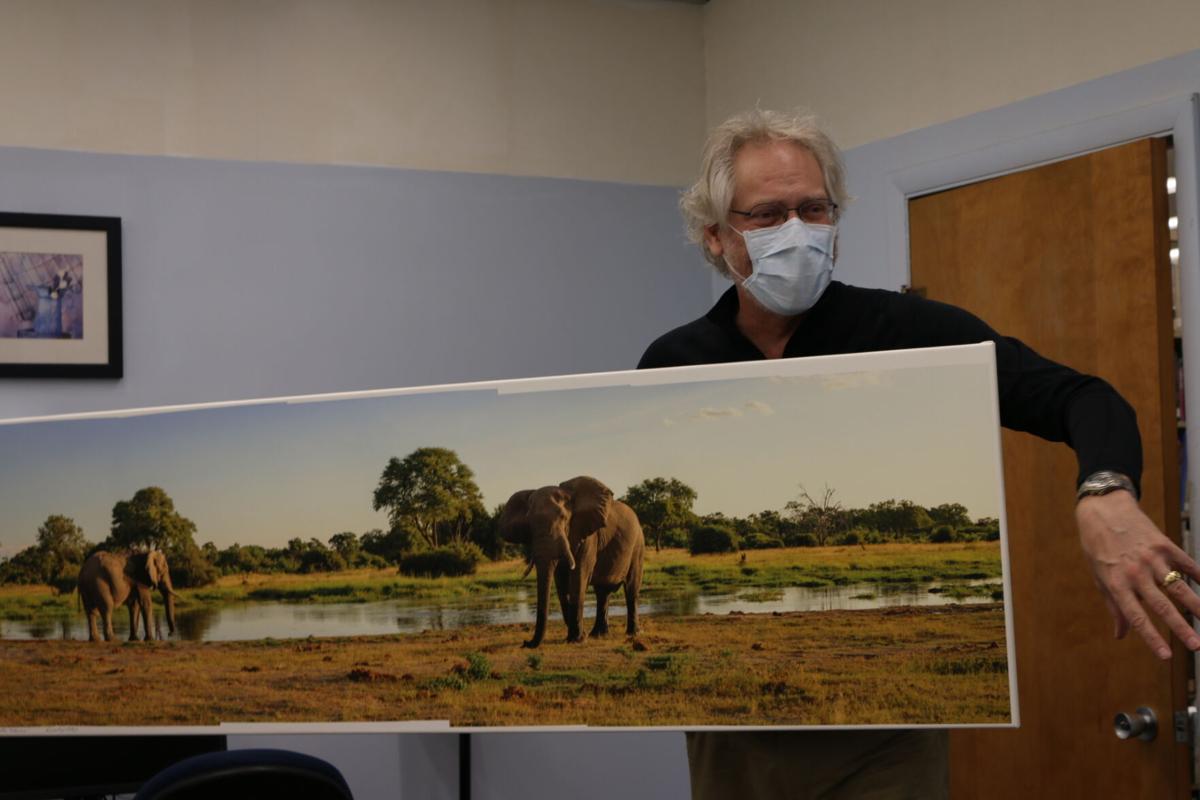 Photography professor Denis Ryan Kelly Jr. shows students a panoramic photo he took of elephants in Africa. He also explains how the image had to be printed on a special machine in order to maintain the size and clarity of the original image. 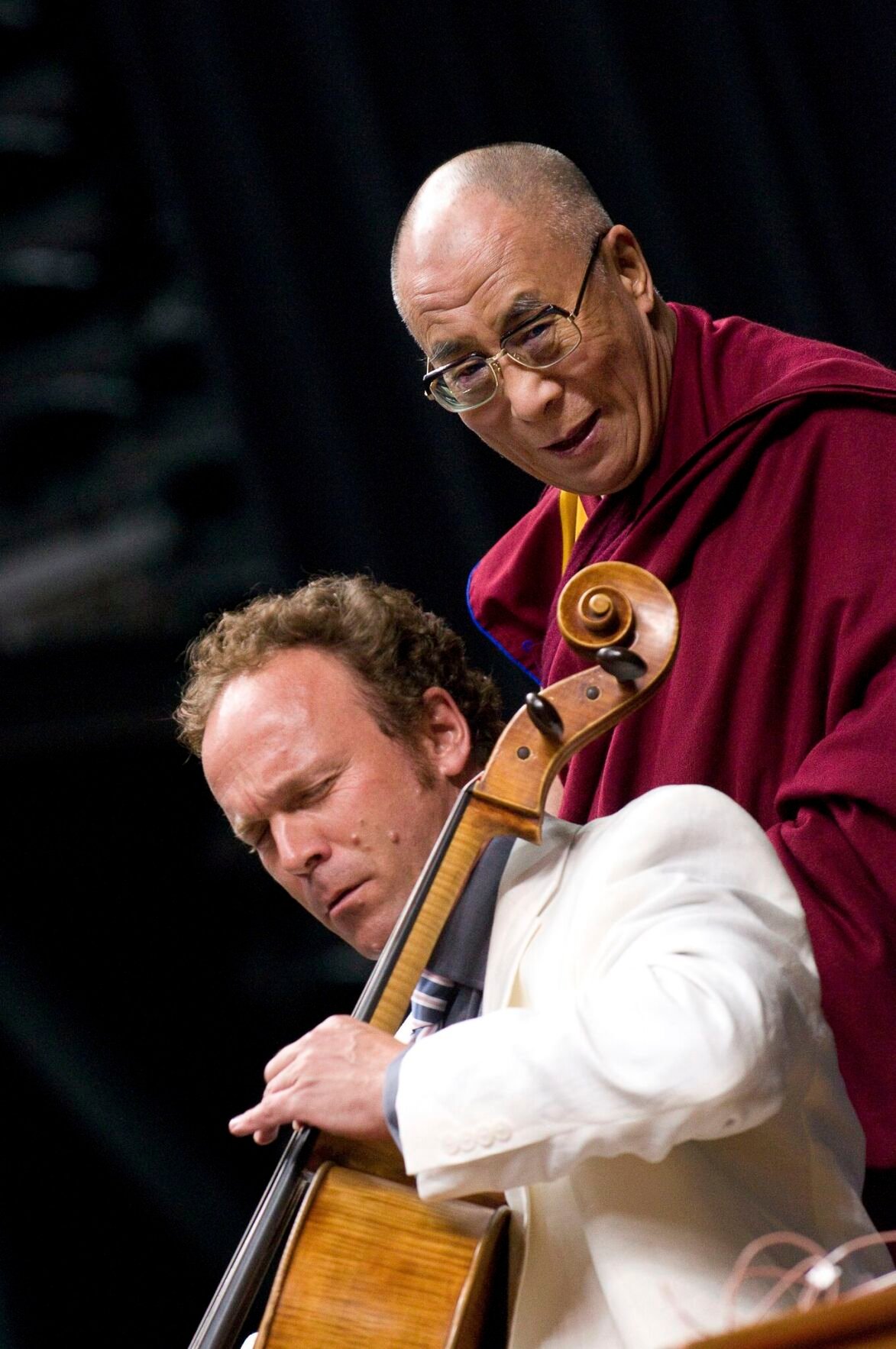 His Holiness the 14th Dalai Lama with Michael Fitzpatrick. 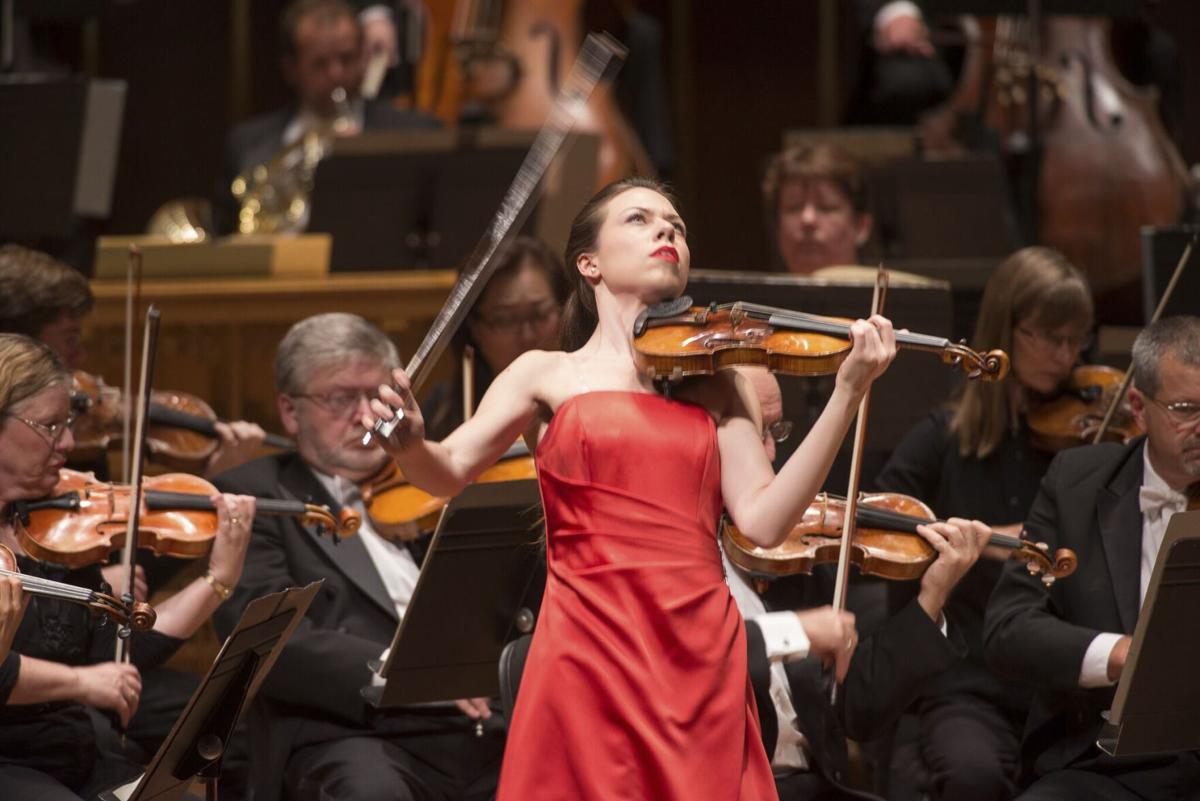 2014 IVCI Silver Medalist Tessa Lark in the Finals with the Indianapolis Symphony Orchestra.

Photography professor Denis Ryan Kelly Jr. shows students a panoramic photo he took of elephants in Africa. He also explains how the image had to be printed on a special machine in order to maintain the size and clarity of the original image.

His Holiness the 14th Dalai Lama with Michael Fitzpatrick.

2014 IVCI Silver Medalist Tessa Lark in the Finals with the Indianapolis Symphony Orchestra.

In January of 1985, Denis Ryan Kelly Jr. found himself hitchhiking in the Irish mountains.

While there, he captured a breathtaking but precarious moment on his camera. A photo Kelly treasures to this day.

Kelly traveled to Ireland not long after graduating from Wabash College.

While in Ireland, Kelly got his hands on a detailed map of the country, inspiring him to hitchhike around the country.

“I was told that it was permissible to just, you know, find an open piece of ground and pitch a tent, which is what I was doing,” he said.

One intriguing place on the map caught Kelly’s eye: A mountain in Ireland called Slieve League, home to some of Europe’s highest sea cliffs.

Cold and alone on Slieve League, Kelly began to wonder why he got himself into this situation.

“There was just sheep and me and, and it was covered in frost up there,” he said.

But the view made the trip worth every struggle. “It was quite intensely beautiful,” Kelly said.

“I said lots of Hail Marys,” he said. “Nobody would have even known I was there.”

Kelly’s introduction to photography was almost as dangerous as this escapade.

When his uncle David came back to Indianapolis from the Vietnam War with a 35-millimeter film camera and photographs of exotic locations, Kelly was hooked.

“My mother lobbied for a camera like that, and she ultimately got it. And I was able to use her camera starting maybe when I was 13 years old,” he said.

Once he entered high school, Kelly took an upper level photography class. Thanks to hours in his dark room and an excellent teacher, his photography advanced.

Kelly continued to enhance his photography skills throughout his time at Wabash College.

After graduating in 1984, Kelly backpacked around the world, photographing anything that interested him.

Kelly’s photography brought him face-to-face with some of the most fascinating and terrifying moments of his life.

He feels helping others become more aware of other cultures will help us examine ours.

Towards the end of the 2000s, the death of Kelly's father led him in a different direction.

In the years leading up to his death, his father, a philosophy professor, had one piece of wisdom to bestow.

“Before he died he said, ‘Son, I think you would enjoy teaching,’” Kelly said.

Not long after his father’s death, Kelly was driving through Indianapolis when a glowing red sign captured his attention.

The sign came from the Art Institute of Indianapolis. After a few days, Kelly followed his gut and went in the building.

“I just went up to the reception desk and told them I was curious what this place was up to. And they said, ‘Would you like a tour?’ And I said, 'Okay.' And they said, ‘Well, here, let’s have Greg Craddock give you a tour,’” he said.

A coincidence almost too good to be true. Craddock was Kelly’s old high school yearbook advisor.

After catching up, Craddock informed Kelly the Institute was looking for a new photography instructor.

“And literally, by the time I walked out of there, I had been offered a job,” Kelly said.

In particular, his work taking publicity photos for the Indianapolis Opera caught the attention of Glen Kwok, the Executive Director of the International Violin Competition of Indianapolis.

“He made this very special arrangement for us,” Kwok said. “I said, ‘I want you to be the official photographer, but you can’t make any noise.’”

The camera’s shutter would distract the judges and audience members from the violinists’ performances.

To counter this problem, Kelly did what any good photographer does: Buy more gear.

“I really did appreciate his extra efforts,” Kwok said. “It’s the reason why I continue to use Denis so often is because he is a true artist.”

Capturing the International Violin Competition of Indianapolis is not the only impressive line on Kelly’s resume. Kelly met Tim Nation, executive director of the Peace Learning Center, at one of his exhibitions as well. Impressed by Kelly’s photographs, Nation wanted to work with him.

“It was so impressive and the institution liked it so much that they arranged to display it for an additional two months after the event,” Nation said.

Kelly watched the Secret Service escort the Dalai Lama onto the stage. They walked His Holiness behind cello player Michael Fitzpatrick.

“And then the Dalai Lama appears over Michael’s shoulder,” Kelly said. “And I photograph the two of them together. And the Dalai Lama looks right at me practically while this is happening.”

These feats would aid Kelly in obtaining his new job as an adjunct professor at Franklin College in fall 2019.

Kelly's predecessor Jim Barnett asked him to be a guest lecturer for Barnett’s students. Barnett informed Kelly the College would be looking for someone to take over Barnett’s position after the professor stepped down. Next thing he knew, Kelly was working for Franklin College.

“I like college students and if I have students who are interested, I’m thrilled to be with them,” he said.

Kelly, now 58, cannot see himself giving up his career any time soon.

“I personally do not see myself retiring,” he said.